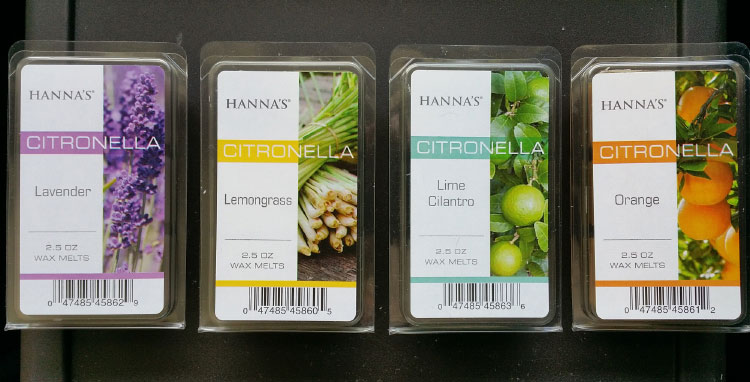 This is a review of Hanna's Candle (Candlemart) Citronella Wax Melts. Citronella is a summery scent that's used to keep mosquitoes away, and brings back memories of summer gatherings with citronella candles on the picnic table.

Citronella is an interesting scent, and not something you'd normally want the inside of your house to smell like. It has kind of a grassy but pungent soapy smell, not very sweet, and a little like lemon verbena but without a true lemon note. I see that these scents consist of 90% citronella and only 10% of the other scent; I would have liked to have had a greater percentage of the other scent, since I really just smelled the citronella. However, it's a true citronella scent that uses real citronella oil!

I didn't test the mosquito fighting ability of these melts. But if you're going to use them outside, it makes more sense to buy the candles rather than the wax melts, unless you're using the melts in a tealight warmer which does not require electricity.