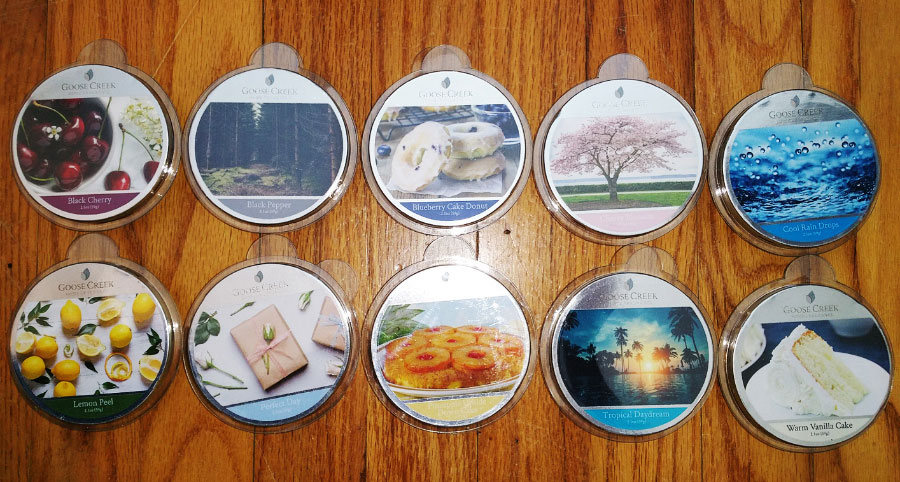 This is a review of Goose Creek Candle Wax Melts from January 2018. Goose Creek Candle wax melts and candles smell great and have very good throw. They can be found on their website at goosecreekcandle.com, and at some stores like Gabe's and Tuesday Morning.

Black Cherry
Top - Black Cherry, Crisp Apple, Sweet Plum; Mid - Violet Petals, Spun Sugar; Base - Red Currant, Green Leaves
I'm not a fan of a lot of black cherry scents because they tend to be too intense, but this one is not. It's like cherry syrup, but not overly sweet, and there's a warmth in there like maybe a hint of amber that gives it a smidgen of a perfumey note, although it's not actually a perfume scent. I like it. It smells kind of similar to their Cherry Cobbler scent, although that one is stronger and much sweeter, even a little caramely, with a bit of a cherry cough syrup note. Looking at the notes, okay red currant is a subtle almost woodsy fruit note that gives scents a "classy" vibe, so that might be why this scent is not overly sweet or intense.
Black Pepper
Top - Black Pepper, Bright Lemon; Mid - Mandarin, Jasmine; Base - Cedarwood, Patchouli, Amber
This is a men's cologne scent. On cold sniff I do detect a hint of black pepper, but I don't smell that when melting. It's a subtle cologne scent, not intense, and not very sweet. It has a tiny bit of a spa quality and there might be a barely detectable hint of lemon or verbena way in the background. Looking at the notes, there's the lemon.
Blueberry Cake Donut
Top - Juicy Blueberries, Black Raspberries; Mid - Vanilla Cake, Crystalized Sugar; Base - Buttercream, Milk
This scent came out in 2015 or 2016 and then I think it skipped a year, but now it's back. I reviewed it in March 2016. It used the soft, messy wax back then, but now, like all their wax melts, it uses their harder wax formula. Throw was the same as it is now.

This is an artificial blueberry scent, but not in a bad way, as it smells quite nice. I also smell a bakery note with a pinch of salty richness. Looking at the scent notes, I do smell the raspberry, which may be what's making the blueberry smell fake. But strangely, I think I might detect a smidgen of musk, because this is a somewhat "perfumey" fruity bakery scent. The scent notes in 2016 showed an apple note, but the new notes don't (I don't smell apple at all), and the old notes show musk but the new notes don't (I do smell that smidgen of a perfumey note).

Cherry Blossom
Top - Cherry Blossom, Fresh Pear; Mid - Lush Violet, Gentle Powder; Base - Bright Florals, Cedarwood
A lovely light floral with a baby powder note, and maybe a pinch of vanilla and possibly a barely detectable hint of cherry. It's sweet but not overly sweet or perfumey. It smells like a nice body cream, or actually more like scented tissues. I really like it.
Cool Rain Drops
Top - Sparkling Bergamot, Watery Ozone; Mid - Clary Sage, Lavender Leaves; Base - Black Pepper, Amber, White Woods
A pleasant oceany watery scent with a hint of sweetness and maybe a smidgen of soapiness. It's not a soapy or shower gel type of scent though. Looking at the notes, I do smell a little bit of the pepper and lavender. It's a nice scent, but I have a lot of scents that smell very similar.
Lemon Peel
Top - Sparkling Lemon, Lemon Peel; Mid - Lime, Orange; Base - Lemongrass, Sandalwood
Super authentic lemon scent that smells like the rind of a real lemon! It's a little sweet though, so it's more like a lemonade scent, but the old-fashioned homemade lemonade that's made with freshly squeezed lemons, ice and water, and a little sugar. Looking at the notes, I see "sparkling" lemon, but there's no fizziness in this scent. Although I can see how it might have a little bit of a lemon soda vibe, but without the fizziness, although that might also be because of the lime, which I do detect as well. I don't detect any sandalwood. It's a fantastic scent! It's a completely different scent from their Old Time Lemonade scent, which also smells great, but that one is sweeter, not really authentic, and has a slight bakery note and even a bit of a soapy note.
Perfect Day
Top - Warm Amber, Creamy Sandalwood; Mid - Sensual Amber, Sugar Crystals; Base - Brushed Suede, Light Musk
I love this scent! It's a rich sweet warm ambery scent with maybe a smidgen of cedar and barely detectable hint of lemon. Looking at the scent notes, the lemon is the mandarin (orange), although it's so subtle it's barely there. When melted, it has kind of a sweet candy note, almost like pink sugar.
Pineapple Upside Down Cake
Top - Warm Pineapple, Vanilla Cake; Mid - Sweet Vanilla Sugar; Base - Mandarin, Lemon, Peach
The pineapple is subtle in this scent, which I like, since I'm not a fan of pineapple scents. It's kind of a vanilla cake scent with a little bit of a pineapple note, but I also smell nuts. And it has a hint of a banana note, almost like banana nut cake with pineapples. It's not overly sweet either. I like this one, but I wish it were a little sweeter.
Tropical Daydream
Top - Juicy Fresh Pineapple, Fresh Pear; Mid - Star Apple, Guava, Palm Leaf; Base - Soft Bamboo, Tropical Woodlands
This is a strong, intense, kind of harsh pineapple scent with black cherry, I think. There may also be a hint of coconut, although I don't smell that when melting. Looking at the notes, the coconut is probably the palm. I don't see black cherry, but that might be the guava.
Warm Vanilla Cake
Top - Fluffy Vanilla Cake, Marshmallow; Mid - Vanilla Bean, Warm Butter; Base - Twisted Vanilla Bean
On cold sniff I smell rich, slightly salty butter, with milky vanilla, a hint of lemon, and maybe a smidgen of coconut. It's very slightly sweet. Melted, it just smells like a stick of butter. It's a nice, unusual scent, perfect for mixing into other scents to add richness and tone down sweetness.
MORE Goose Creek Candle Wax Melt Reviews
Do you own or work for a wax melt company? Our FREE Review & Promotion Service can help you get more customers!
Join Facebook Group