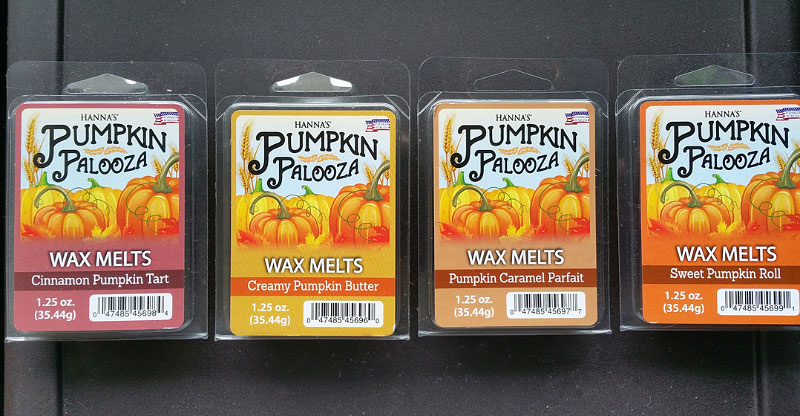 Cinnamon Pumpkin Tart
Notes: Fresh pumpkin, clove, nutmeg, cinnamon bark, vanilla whipped cream, golden graham
This is mostly a cinnamon scent, but it's a nice "cinnamon powder" cinnamon roll type scent. Sweet and a little rich, with a little clove and nutmeg. It's a very nice scent, not a harsh "Big Red" or "Red Hot" cinnamon scent at all. I'm not a fan of straight cinnamon scents, and I like this one!
Creamy Pumpkin Butter
Notes: Fresh pumpkin, cardamom, nutmeg and pure vanilla extract
A sweet rich buttery pumpkin scent with nutmeg, but not overly spicy, and not nauseatingly rich, and not really salty either like a lot of pumpkin scents can be. Very nice!
Pumpkin Caramel Parfait
Notes: Pumpkin spice blended with buttery caramel, honeyed cream and vanilla.
A sweet caramely vanilla scent with a hint of pumpkin spice. It's not overly rich and doesn't have the salty notes that a lot of pumpkiny scents have.
Sweet Pumpkin Roll
Notes: Brown Sugar combines with buttercream and sweet lemon to create a complex fragrance laced with pumpkin accord, ginger, and nutmeg with hints of vanilla, pecan, and sugarcane
This is the same as the Mainstays Pecan Pumpkin Cake scent from Walmart (which is also a dupe of Bath & Body Works Pumpkin Pecan Waffle). It's a super rich milky caramel scent with a nutty note. Looking at the scent notes, yep, there's the nuttiness of the pecan. I don't smell lemon at all. Fantastic scent!