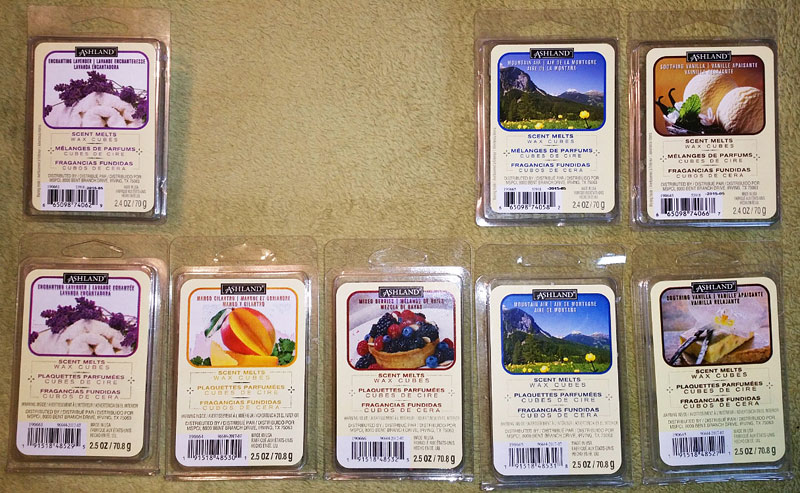 These scents have been available at Michaels for years, and are there year-round (although some Michaels stores don't carry them at all). They are located in the candle aisle, not the seasonal kiosks where the taller seasonal wax melts are located. The wax formula for these core scents changed in 2018, as well as some of the scents and packaging. For years the wax was very soft and messy (probably soy), and with only a few exceptions they didn't throw well. The new wax is hard (paraffin) and throws much better. But the more likely reason for the improved throw is that these harder wax melts are made by Hanna's Candle! Hanna's Candle is still making these core scents for Michaels, even though Hanna's is no longer making the seasonal scents (as of Fall 2018).

To identify the old and new core wax melts, the old wax melts say 2.4 oz. on the label, and the wax is very soft. The new wax melts say 2.5 oz. on the label, the wax is hard, and the package is slightly taller than the old package (but not as tall as the seasonal scents). The store might carry both the old and new versions at the same time. In the picture above, the old versions are in the top row, and the new ones are in the bottom row.

2020 Update - It looks like Michaels is no longer carrying these core scent wax melts. If you do find them, they're likely to be very old.

Enchanting Lavender
There are 2 versions of this scent at the store, the much older (from 2014-2015), softer wax in the 2.4 oz. clamshell, and the newer hard wax in the 2.5 oz. clamshell that came out last year (made by Hanna's Candle). Both lavender scents are authentic, but they are two different scents.

I prefer the older scent, which is a little sweeter and more powdery. The newer scent is more authentic, with a little bit of that medicinal herbal lavender note that smells like a smidgen of eucalyptus. I believe it's the same scent as Hanna's Candle Fresh Lavender Garden scent.

Mango Cilantro
The new version does smell like mango, kind of like peach but a bit harsher. I don't smell cilantro or any herbal notes. It's a nice scent if you like peach or tropical fruit type scents, but like a lot of those types of scents, it has a tiny bit of that cat pee vibe that peach type scents sometimes have. The older, softer wax formula smelled better (I no longer have it and couldn't find it this time). It wasn't as harsh, didn't have the cat pee vibe, and it was a sweeter "peach nectar syrup" type of scent.
Mixed Berries
This smells like fruit candy, sweet with a little bit of tartness. It smells like a couple of different types of fruits, like mulberry, cranberry, cherry, and maybe a hint of raspberry. It smells artificial, but not annoyingly so. The older, softer wax formula (which I no longer have and couldn't find this time) had almost zero throw. The new harder wax has strong throw, 3.5 out of 5.
Mountain Air
The old scent is one of my favorite scents. It smells like a super soapy soap and fresh air, with hardly any sweetness. There may be a smidgen of an herbal note way in the background. It would smell a little like a men's body wash if it were sweet.

The new scent is completely different, and it's also a nice scent. It's the same as Aldi Fresh Cotton Blossom from January 2018 (also made by Hanna's Candle), but oddly it's not the same scent as Hanna's own Fresh Cotton Blossom. It's a nice sweet laundry detergent scent with a hint of a biting laundry note. But it's not a soft powdery fabric softener scent either. It doesn't smell soapy, and it's sweeter than other similar scents I've smelled with a little bit more of a floral note, although it's not really perfumey either. Hard to describe! This took about an hour to throw really well.

Soothing Vanilla
The old scent is just a plain, generic vanilla, with possibly a smidgen of coconut. It smells like a vanilla scented car air freshener. Not a bad scent, but a bit artificial. It smells better melted, quite nice actually, and without the buttery cookie note that a lot of vanilla scents have.

The new scent is totally different, and smells incredible. I've smelled it before, so I think it's a dupe for something else but I don't know what. It smells like an expensive warm cashmere/amber perfume with a hint of vanilla and maybe a smidgen of patchouli. But it's not an overly perfumey scent, and it's not really a floral. It's one of my favorite scents ever, and the scent lasted the entire day (at least 12 hours, but probably would have gone longer if I hadn't turned off the warmer). I wrote about this one in my Facebook group HERE.

MORE Michaels (Ashland) Wax Melt Reviews
Do you own or work for a wax melt company? Our FREE Review & Promotion Service can help you get more customers!
Join Facebook Group