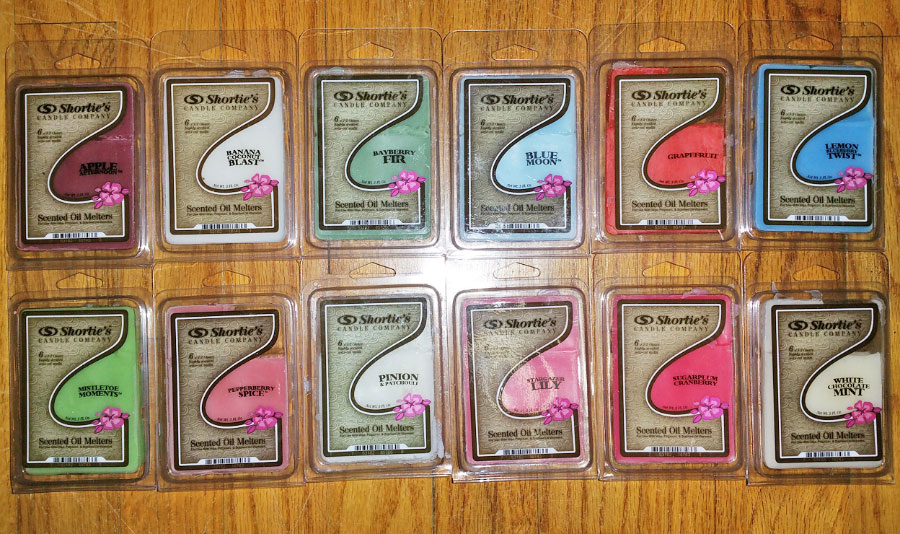 This is a review of wax melts by Shortie's Candle Company, a small company in Reno, Nevada that makes candles, wax melts, and accessories such as warmers. They sell their products online as well as through wholesalers across the country including Whole Foods and various card and gift shops. They even have a Fundraiser Program for organizations.

Shortie's Candle Company wax melts are made with soft food-grade paraffin wax, although in February they will be changing their formula to a natural soy blend. I was told that they've done extensive testing on the new soy blend and they throw extremely well. Hopefully I will get to review them when they are released!

I did another review of Shortie's wax melts in May 2020.

Apple Afternoon
Warm scent of apple cider mingles with evergreens
I love this scent. It smells like a combination of apples and pine, with maybe a smidgen of vanilla. It sounds like a strange mix, but it really works. Looking at the notes, the apple smells like more of a fresh apple than apple cider, and I don't smell mulling spices.
Banana Coconut Blast
Banana and coconut, blended with a pinch of sugar
This is a very sweet, almost candy-like banana scent with a hint of coconut. It's a fake banana scent rather than authentic banana. Melted, it smells like a rich sweet vanilla banana frosting. I like it.
Bayberry Fir
Bayberry and Douglass Fir, with subtle hints of cinnamon, clove, vanilla, and hardwoods
A smoky pine scent with a sour kind of sage-y note. I've smelled this scent before, and I don't really care for it. However, I think that's just me, as it's similar to some other scents that I don't like, that other people love.
Blue Moon
Jasmine, cyclamen and carnation waft with top notes of lime zest that mingle with deep marine notes that form the base and body of this fragrance.
A fresh air, watery type scent with a hint of a peppery note, maybe a smidgen of grapefruit, and perhaps a barely detectable tinge of mint. Looking at the scent notes, I don't really smell floral notes because this is not a sweet scent, and actually has a little bit of the salty marine note. I guess the lime zest is the grapefruit I think I smell. It has a slight bitter note that at first I didn't care for, but when I melted it a second time I actually liked it.
Grapefruit
This bitter sweet citrus fragrance features watery green nuances blended with top notes of lily of the valley and coriander blossom on a body of Pink Pomelo Grapefruit.
Wow, this is an incredible scent! I definitely smell the grapefruit, but I think there's also some other sweet fruit in there as well. I love this one; it's fresh and juicy and summery! Looking at the scent notes, the sweetness I detect is probably the lily of the valley (although I don't smell any floral notes at all). Coriander supposedly is a pungent soapy slightly citrusy scent that smells a little like pink peppercorns, and I do smell a citrusy scent but that might be from the grapefruit.
Lemon Blueberry Twist
Lemons and blueberries twisted together with a pinch of sugar
This smells like lemon verbena with a tangy lime note. I think I detect a smidgen of the sweet blueberry. It's not a foodie scent like the name would suggest, and I think I detect a barely noticeable hint of citronella, almost like a bit of spa type of scent. There's some note in this one that I don't care for.
Mistletoe Moments
Freshly trimmed pine tree and the sweet aroma of ripe juicy berries
I smell pine and a little bit of sweet tart cranberry. This also has that slightly sour note that the Bayberry Fir scent has, which I don't care for. Like the Bayberry Fir, I think I'm in the minority as it seems that a lot of people like this type of scent.
Pepperberry Spice
With top notes of berries, citrus and spicy pepper, pepperberry mixes well with cinnamon and clove, and a mild base of vanilla, patchouli and sandalwood
I smell patchouli with a hint of an old perfume note, in a good way. I think I also smell a little bit of clove, and maybe a smidgen of a berry note. It's a unique scent, and I really like it. Looking at the notes, I don't smell citrus.
Pinion & Patchouli
The woody Southwest scent of pinyon pine paired with a touch of musky aromatic patchouli oil, derived from an exotic Asian relative of the mint family
This smells fantastic, like balsam (a sprucey type scent) with a deeper, warmer slightly sweet note which is probably the patchouli. Pinion is a type of wood that smells like juniper. When melted, it's a very nice aromatic blue spruce type scent.
Stargazer Lily
All of the strong beautiful fragrance of the flower without the mess
This really smells like a lily! It's not overly sweet, but it does have a little bit of a rich musk perfume note. It also has a little bit of an old-fashioned soapy note. It smells like real flowers in a hothouse or greenhouse, although it does have a hint of bitterness that I don't care for.
Sugarplum Cranberry
Tart cranberries top this concoction of sweet plums sprinkled with a dusting of sugar
This is a sweet, slightly tart fruity scent that smells a little like fruit candy, but also has a tropical note. Despite the sweet tartness, it doesn't really smell like cranberry. I'm probably smelling more of the plum. I'm not a fan of the scent as it's a bit too tart, even though it's also very sweet.
White Chocolate Mint
White chocolate mixed together with freshly pureed mint
A fantastic rich vanilla mint scent with a warm chocolate note. The chocolate is not that burnt, bitter chocolate that some chocolate scents have. I love this scent! But the scent started fading within 2 hours.
Do you own or work for a wax melt company? Our FREE Review & Promotion Service can help you get more customers!
Join Facebook Group