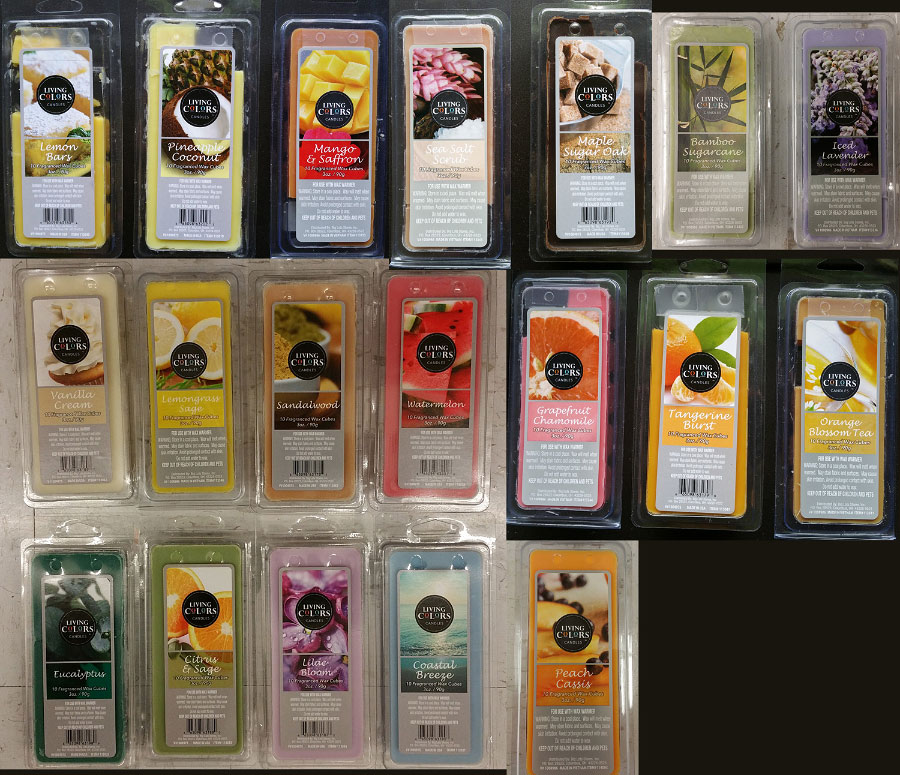 Living Colors comes out with new scents every few months. But sometimes the scent names don't match the scent. Many Living Colors melts have very weak or zero throw. Some may do well in a very small bathroom, but many would not throw well anywhere.

Apple Cinnamon
Typical fake generic fall apple scent with a hint of cinnamon, like a cinnamon apple room spray.
Bamboo Sugarcane
It doesn't smell like bamboo or sugar. It's not sweet at all. It's very very savory, almost like a salad with perhaps a hint of lemon. It smelled a little like cat pee when melted, not good at all. I don't get that cat pee note on cold sniff though.
Citrus & Sage
This smells like orange with something in the background that gives it a slight spa quality. It's very similar to Orange Blossom Tea.
Citrus Vanilla
I'm not sure why I bought this one, since it's straight vanilla with a smidgen of coconut which makes it smell like a vanilla cupcake (you don't really smell the coconut). I don't smell citrus at all. It's not overly sweet. I have tons of vanilla scents, and from experience I've found that Living Colors vanilla scents typically have no throw. And I was right.
Coastal Breeze
Very nice fresh soapy body wash or herbal shampoo scent but very light on cold sniff. Slight ocean type saltiness.
Cool Serenity
Very nice super sweet cotton laundry scent. Not a harsh laundry scent.
Cucumber Mint
It smells like a spa mint, kind of like ScentSationals Zen. I don't smell cucumber. It's not very strong on cold sniff, and since I already have several Zen type scents, I didn't buy this one.
Eucalyptus
This is similar to Cucumber Mint but slightly more savory.
Garden Blooms
I really like this one but I can't figure out the notes. It's definitely floral and very sweet. It almost has a lilac vibe, but not quite, and maybe baby powder. It smells fake, but not in a bad way, more like a really floral shower gel with fresh notes.
Gardenia
Nice generic gardenia scent.
Grapefruit Chamomile
Smells like real grapefruit!
Hazelnut
This smells like coffee with a lot of cream and hazelnut creamer mixed in.
Honeysuckle
Nice honeysuckle scent.
Iced Lavender
This smells like a fake lavender, but smells very nice.
Lemon Bars
This smells like straight "true" lemon with a little bit of salt. It's not a kitchen lemon or a bakery lemon or a lemon alcoholic drink. It's probably one of the best lemon scents I've ever smelled.
Lemongrass Sage
This is a really fake lemon scent, like a lemon candy but not very lemony. I can't describe it, and although it's not an awful scent, I don't care for it, so I didn't buy it.
Lilac & Lily
I definitely smell lilac, but I think there's a slightly different floral mixed in. It's a very "spring" like scent, and it's slightly more authentic than the Lilac Bloom scent.
Lilac Bloom
This smells like lilac room spray. It's nice, but not authentic. It's sweeter than Lilac & Lily and I like it just a bit more.
Lotus Blossom
Some kind of floral?
Mango & Saffron
Super sweet peach or persimmon nectar type scent. It's a nice scent, but it has a very slight cat pee note!
Maple Sugar Oak
I don't smell any wood in this. It smells like maple french toast or maple pancakes. It's not straight maple syrup, because I smell a slight bread note as well.
Orange Blossom Tea
I definitely smell orange and tea, and the orange is more like an orange rind rather than a sparkly citrusy orange. The tea is not a chai tea, but more of an iced tea. There may be a little bit of ginger in the background. It's a very nice refreshing scent.
Pineapple Coconut
Fake pineapple coconut tropical scent, like a tropical car freshener. It smells better melted though.
Sandalwood
This does not smell like sandalwood at all. It's straight cinnamon, maybe with a little bit of sugar. No wood notes at all.
Sea Salt Scrub
This is a really strange scent. It doesn't smell like ocean or sea salt or a spa scrub type scent at all. It smells like burnt chocolate and dust combined. That description sounds awful, but it's so unusual that I can't not like it.
Sweet Cherries
Fake cherry scent, quite nice.
Tangerine Burst
Super strong fake orange soda scent without the fizziness, or orange candy. Very strong and orangey, and it smells really good, although it's a little harsh. Maybe I'll mix it with a vanilla.
Tangerine Tigerlily
I no longer have this one so I don't remember the specific notes. I do recall that it smelled great on cold sniff, but had zero throw.
Tranquil Waters
I no longer have this one so I don't remember the specific notes, but it had no throw.
Vanilla Amber
This is a nice vanilla buttercream type scent with a rich cashmere amber note, like a smoky vanilla. It's a very nice elegant scent.
Vanilla Cream
This is a more sweet buttercream vanilla scent than Citrus Vanilla. I like this one more. It's not super sweet, like buttercream frosting, but more like a sweet white spongey cake or an iced vanilla cookie.
Waterfall Mist
This is a nice jasmine type floral scent with a soapy note. It's not overly sweet, and has a very slightly salty watery note. Great scent.
Watermelon
Nice fake watermelon candy type scent. I'm not a fan of watermelon scents, so I didn't think I'd like this one. But it smells nice and summery.
MORE Big Lots (Living Colors) Wax Melt Reviews ►
Comments
Join our Facebook Group for MORE discussions about U.S. store bought and retail brand wax melts.