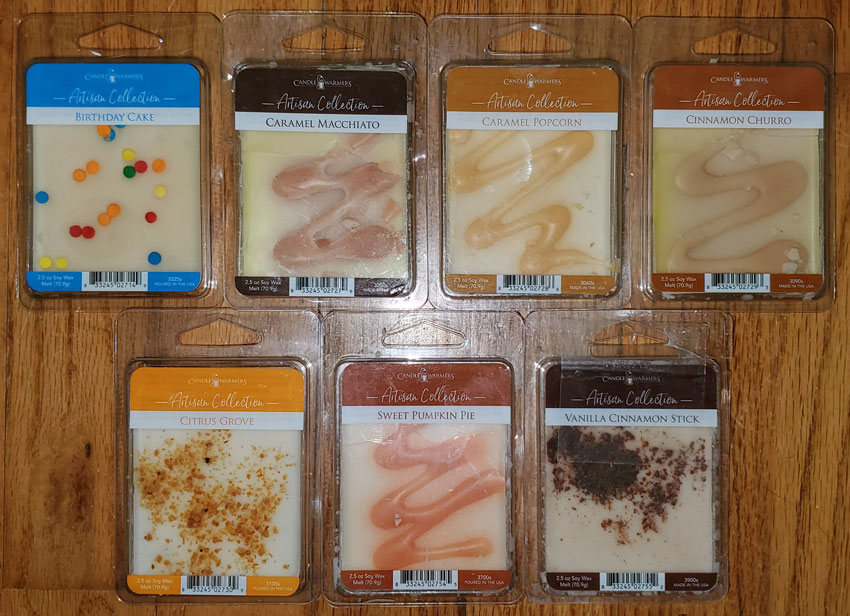 This is a review of Candle Warmers Artisan Collection soy wax melts. These can be found on the Candle Warmers website, and at stores such as At Home.

These wax melts feature decorative toppings like cinnamon, sprinkles, and swirls of "caramel", that make them look like 2.5 oz. versions of Swan Creek Candle wax melts. I only found 7 of the scents from their Artisan Collection at the At Home store.

Birthday Cake
Fantastic, toothachingly sweet scent that smells just like birthday cake with super sweet vanilla buttercream frosting with jimmies (sprinkles) on top, and a hint of coconut. I can actually smell the cake, and it's super authentic. I adore this scent! On cold sniff it's crazy strong, so I'm really disappointed that the throw is so weak.
Caramel Macchiato
Buttery maple caramel butterscotch that smells a little like French toast, but without the bready note. Macchiato is a milky espresso coffee drink, and I think I'm getting a smidgen of coffee in this scent, but it's way in the background. It's a nice scent.
Caramel Popcorn
On cold sniff this smells like toothachingly sweet butterscotch and salted caramel. It's extremely sweet and buttery rich, but it also has a bit of saltiness. I think I do detect a popcorn note as well, but it's not enough to call this a caramel popcorn scent. When melting, however, it's still sweet but not as sweet as on cold sniff, and very buttery and rich, and I definitely detect the popcorn, not overly salty but just right. This is an incredibly yummy scent... This scent and Birthday Cake are my favorites of the bunch.
Cinnamon Churro
A nice sweet gingerbread scent with a bit of cinnamon.
Citrus Grove
Fresh orange juice with a bit of grapefruit that gives it a little citrusy tartness. I like it!
Sweet Pumpkin Pie
Cinnamon with nutmeg and a hint of cloves. Which are indeed pumpkin spices, but this smells more like a cinnamon roll (or specifically, a pumpkin roll). It's yummy!
Vanilla Cinnamon Stick
Fantastic rich cinnamon roll scent with a strong bready note. Unlike most similar scents, this one is not overly sweet, which makes it smell totally authentic. The cinnamon is like a dry baking cinnamon rather than a harsh Big Red gum type cinnamon. And I do detect the milkiness of the vanilla. I'm not a fan of these types of scents, but I like this one because it's so realistic. The packaging for the one I reviewed had a crack in it (which can allow the scent to dissipate), so the throw for this scent might actually be better than what I experienced.
MORE Candle Warmers Wax Melt Reviews
Do you own or work for a wax melt company? Our FREE Review & Promotion Service can help you get more customers!
Join Facebook Group