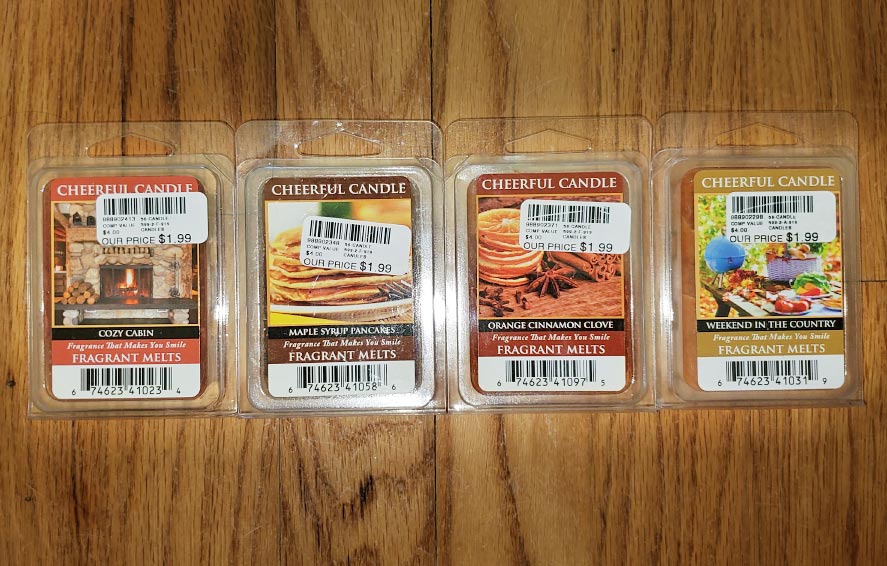 This is a review of Cheerful Candle (A Cheerful Giver) wax melts fall and Christmas scents.

I bought these from Gabe's discount store, but Cheerful Candle (A Cheerful Giver) also sells wax melts on their website at acheerfulgiver.com, as well as gift shops and sometimes in discount stores like Gabe's.

I tried Cheerful Candle wax melts several years ago and the throw was not good. So I was pleasantly surprised that these scents performed quite well. The wax is an odd texture that breaks easily, is hard but with a very shiny almost glistening surface, not greasy like soy wax, and has a mottled, marbleized appearance. This mottling is created through a special process applied to paraffin wax.

Barnyard Breakfast
Notes: Down home country french toast, buttery maple syrup, cinnamon & pecans
A super sweet caramely scent with maple, a slightly bready note, a hint of nuttiness, and maybe a smidgen of cinnamon. It's different from other similar scents I've smelled, more buttery and not as salty. It smells like cinnamon french toast. Very nice! Looking at the scent notes, they're spot on! This one is not pictured.
Country Morning
Notes: Rich coffee and cream layered with spicy nutmeg and sweet caramel maple cinnamon
This scent actually smells just like the description. I smell milky coffee with a little bit of cinnamon and a hint of caramel. It's a nice scent, and it smells almost exactly like Better Homes & Gardens Winter Morning Latte from 2017 (also called Christmas Morning Latte in 2015). This one is not pictured.
Cozy Cabin
Notes: Forest fir, sandalwood & cedar
Fantastic blue spruce scent with an aldehydic note, not a biting pine or eucalyptus type scent. It's very similar to one of my favorite scents, Colonial Candle Blue Spruce, and Hobby Lobby Christmas Tree.
Maple Syrup Pancakes
Notes: The pure fragrance of the finest Vermont maple syrup
On cold sniff this smells incredible, like a combination of brown sugar, maple, butter, and a hint of caramel. Melted, it's still quite nice, but more of a typical maple caramel bakery scent without the rich, buttery, brown sugar note.
Orange Cinnamon Clove
Notes: Cinnamon & cloves draped with a touch of orange
This smells kind of like pumpkin pie filling with the cinnamon and nutmeg, and just a hint of clove for warmth. But it's that hint of orange that sets it apart. It's not an orange pomander scent, which would smell soapy and a little sour. I really like this scent! It's similar to Tuscany Candle Trick or Treat, but that scent is sweeter and richer and has slightly less cinnamon.
Weekend in the Country
Notes: Warm sunshine, falling leaves, cinnamon apples and clove scented pine cones
A nice apple cider scent, sweeter than most similar scents, and without mulling spice notes. It's more like apple juice with a hint of cinnamon.
Comments
Join our Facebook Group for MORE discussions about U.S. store bought and retail brand wax melts.