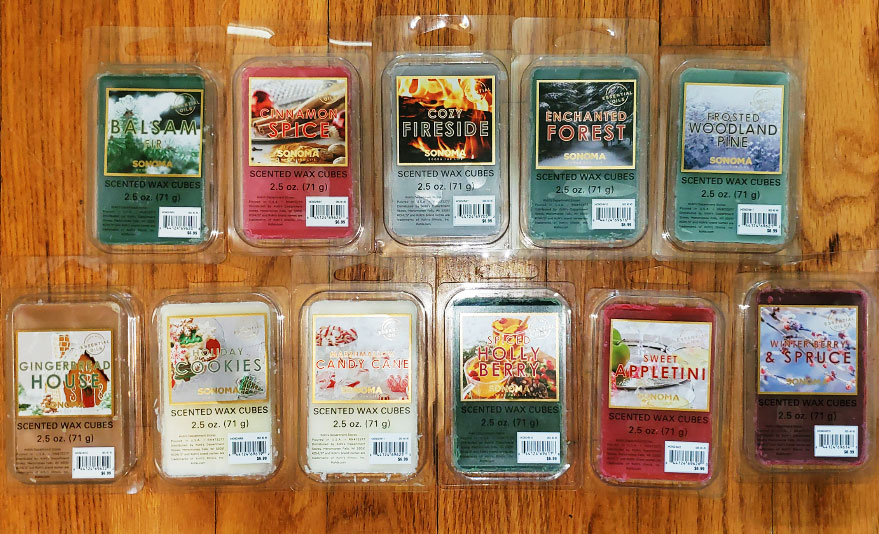 This is a review of Sonoma Christmas 2019 wax melts from Kohl's. As usual, most (if not all) of the scents are the same as those from 2018 (which I did not review) and previous years.

I'm surprised there's no Deck the Halls scent (cinnamon), which comes out every year. I suspect there are more scents to come, as is usually the case with Sonoma wax melts. The first scents to come out in the fall and winter are usually the hard wax made by Empire Brands, and a few weeks later they come out with the soft wax by MVP Group International. There are only 11 scents available right now, and stores generally don't come out with an odd number of scents.

Balsam Fir
Fresh Balsam, Crisp Fir, Cedarwood
A very nice smoky, woodsy spruce scent. It's not a harsh, biting pine type scent. It's the same as 2017 and 2018.
Cinnamon Spice
Cinnamon, Spice, Clovebud
On cold sniff I smell ginger first, then cinnamon, and a hint of cloves. But melted, I really just smell the ginger with maybe a hint of a bakery note, but no bready notes. It's similar to Gingerbread House, but this scent is "brighter" and without bready or molasses notes. I think this scent smells more like gingerbread than Gingerbread House!
Cozy Fireside
Cedarwood, Smoked Vanilla, Patchouli
A combination of sweet tobacco, milky marshmallow, a hint of patchouli, and possibly a smidgen of barely detectable baby powder. It's a sweet scent without any smokiness that one would expect from a fireside scent. Very nice! It's a totally different scent from Cozy Fireside from 2017 (notes for that scent were cinnamon, nutmeg and sandalwood, and it was a very sweet cedar scent without any cinnamon or nutmeg notes). It's the same as the 2018 scent, which I didn't review.
Enchanted Forest
Eucalyptus, Spruce, Wood
I believe this is a new scent. It's a biting pine scent with some other notes way in the background, and a barely detectable smidgen of sweetness (it's not a sweet scent at all, but more sweet than other pine scents I've smelled). It has a tiny bit of a Play-Doh note that I don't like. It smells familiar, so it might be the same as an older Sonoma scent, but with a different name. It smells better melted.
Frosted Woodland Pine
Frosted Pine, Balsam Fir, Frozen Eucalyptus
A musty pine scent with a fresh mint note and a strong sinus clearing effect. It's a little sour, but not enough to ruin the scent. It's the same as the 2018 scent, which I did not review.
Gingerbread House
Ginger, Cinnamon, Sweet Vanilla
A fantastic rich molasses scent with a ginger note and a smidgen of a bready bakery note way in the background. It's different from other gingerbread scents I've smelled (most of which smell more like the Cinnamon Spice scent). I don't think it's the same scent from previous years (2017, 2016, and 2015), despite the same notes, as I recall they smelled different, more like the Cinnamon Spice scent, and I described it as being too cinnamony, which this scent is not. I don't know if it's the same as 2018 (I didn't review it).
Holiday Cookies
Sweet Vanilla, Cookie Dough, Buttercream
Fantastic slightly sweet, slightly salty vanilla scent that smells like eggnog and cookies. Delicious scent! It's the same as 2017 and 2018, but not the same as 2015
Marshmallow Candy Cane
Peppermint, Vanilla, Marshmallow
I believe this is a new scent. It's a fantastic peppermint scent, sweeter than most, with a vanilla buttercream note, and that smidgen of marshmallow. It's a nice, strong, sinus-clearing mint. It's different from Candy Cane Lane from 2017 (that was a strong peppermint hard candy scent, while this scent is sweeter, with more of a vanilla note, although it still has a strong sinus-clearing effect). I don't know if it's the same as Candy Cane Lane from 2018 (notes were peppermint, creamy vanilla and butterscotch). It's different from Falling Snow from 2017 and 2015 (which wasn't as sweet).
Spiced Holly Berry
Mulled Apple, Spiced Berries, Orange
This is an apple cider scent with an orange pomander note. I'm not a fan of orange pomander because of the slightly sour, soapy note, but the apple cider makes it a bit better. It's not a light apple juice type cider, but a heavy apple cider with mulling spices. I'm not really a fan of this one. It's the same as the 2018 scent, which I did not review.
Sweet Appletini
Apple, Citrus, Candy
I believe this is a new scent. It's a dull, waxy, fake apple scent with another note I can't figure out. Maybe wine? It could be orange since there's supposedly a citrus note in here, but it's not a bright, citrusy orange, and it's not a pomander scent. I don't detect any candy notes either. I'm not a fan. It smells a lot like Mainstays Apples & Berries from 2015.
Winter Berry & Spruce
Frosted Berries, Holiday Spruce, Hints of Vanilla
A slightly biting, bright pine scent with a smidgen of a tart, sour, only very slightly sweet fruit (sour cranberry?). It's a great scent! Same as 2017, as well as Winter Berry Spruce (without the "&") from 2016.
MORE Kohl's Sonoma Wax Melt Reviews
Do you own or work for a wax melt company? Our FREE Review & Promotion Service can help you get more customers!
Join Facebook Group