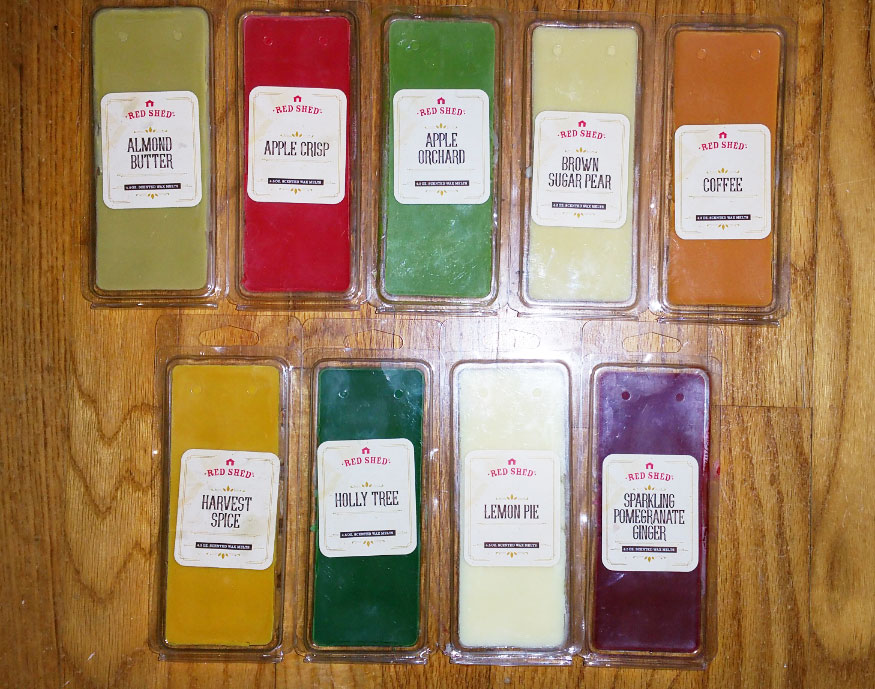 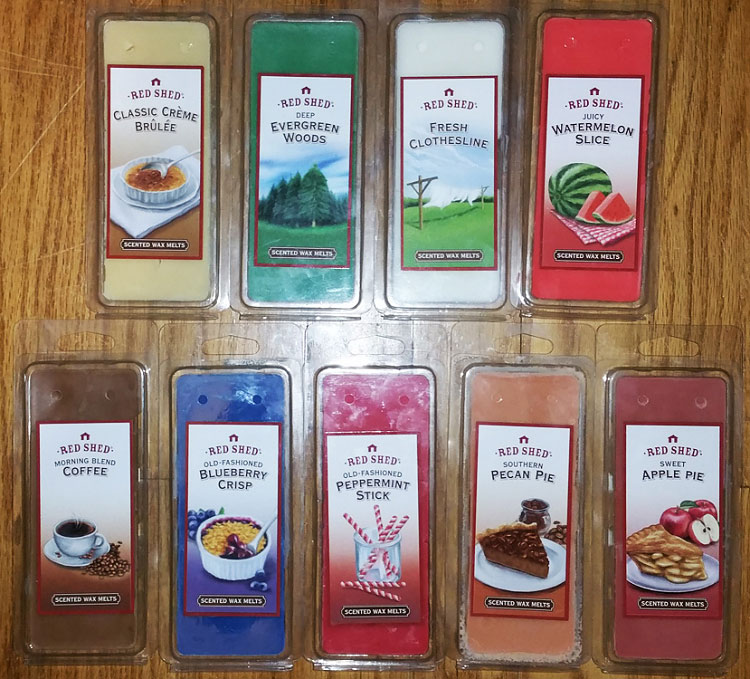 Like the Living Color wax melts, to keep the scent from dissipating while storing it, tape over the two holes at the top of the package. If wax scents are exposed to air for too long, they can start to lose their scent. Also, some of the clamshells might not close completely, so you have to make sure they snap shut where the lid bends.

These can be found at Tractor Supply stores, although you might be able to find some of them on the Tractor Supply website if they are current scents.

Almond Butter (2019)
Fantastic marzipan scent (a confection made with sugar, corn syrup and almonds).
Apple Crisp (2019)
A nice super sweet apple scent with a little bit of a cinnamon note. It's not really an authentic apple, but more like apple and cinnamon potpourri. It does have a smidgen of a bakery note that makes it smell kind of like apple pie.
Apple Orchard (2019)
This might be one of the best apple scents I've ever smelled. It's fake apple with a hint of cinnamon, but it's also super sweet with a candy note. It also has a sweet floral note like gardenia, as well as a fresh air note that keeps it from being perfumey. It's not quite a foodie scent because of the floral and fresh air notes, and it could almost be an apple body wash scent if it didn't have the smidgen of vanilla and cinnamon.
Brown Sugar Pear (2019)
This smells just like the scent name: pears with brown sugar! And also a little bit of caramel. It's very sweet, and also very fake, but that's okay because it smells incredible, and the scent lasted all day, at least 8 hours.
Classic Creme Brulee (2017)
A nice sweet buttery caramel scent with a coffee note. The coffee note is a bit fake though, but it's still a very nice scent.
Coffee (2019)
Fantastic, authentic, strong coffee scent that smells a little like espresso. Scent started dissipating within 2 hours.
Deep Evergreen Woods (2017)
I expected a pine scent based on the name, but this is kind of a sweet scent that I think is a fake cinnamon with cranberry perhaps. There might also be just a smidgen of pine way in the background, but I'm not sure. It's a pleasant scent.
Fresh Clothesline (2017)
A fantastic sweet fabric softener scent with maybe a slight gardenia note. It's not a harsh laundry detergent scent.
Harvest Spice (2019)
This is not a typical apple cinnamon fall type scent. I smell mostly ginger, then nutmeg and a little cinnamon, although the spices are not too strong. And the base is a super sweet vanilla buttercream, so this smells like ginger buttercream. Very nice scent!
Holly Tree (2019)
A pine scent with a little bit of smokiness and a tiny bit of a "dirt" note, which is usually not a bad thing, but the pine is kind of fake, with a little bit of a chemical note. It's not a bad scent, but I've smelled better pine scents.
Juicy Watermelon Slice (2017)
This is a fake watermelon scent but it's not very sweet. I wouldn't mind the fakeness if it were sweet, because then it would just smell like watermelon candy, which it doesn't. I don't care for it.
Lemon Pie (2019)
This is not a foodie lemon scent, although I think it has some vanilla in it. It's a harsh lemon, or actually, it's lime, and it's very sweet, with a soda note, but without any fizziness. But it's also fresh and slightly soapy. So it's basically a cross between lime flavored creme soda without any fizziness, and lemon dish detergent. And I love it!
Morning Blend Coffee (2017)
Fantastic authentic black coffee scent with a hint of sweetness, just enough to keep it from being too bitter. I think this one is different from their regular "Coffee" scent, which has no sweetness.
Old-Fashioned Blueberry Crisp (2017)
A generic but very nice blueberry bakery scent.
Old-Fashioned Peppermint Stick (2017)
A nice sweet peppermint candy scent.
Southern Pecan Pie (2017)
A fantastic rich nutty bakery scent with a milky caramel note.
Sparkling Pomegranate Ginger (2019)
I don't smell anything on cold sniff, maybe a tiny bit of something fruity. But it smells like it's been sitting in the warehouse for a long time. There's also no tag for it on the shelf, so it may be last year's scent.
Sweet Apple Pie (2017)
A fake but pleasant sweet apple cinnamon scent.
Do you own or work for a wax melt company? Our FREE Review & Promotion Service can help you get more customers!
Join Facebook Group