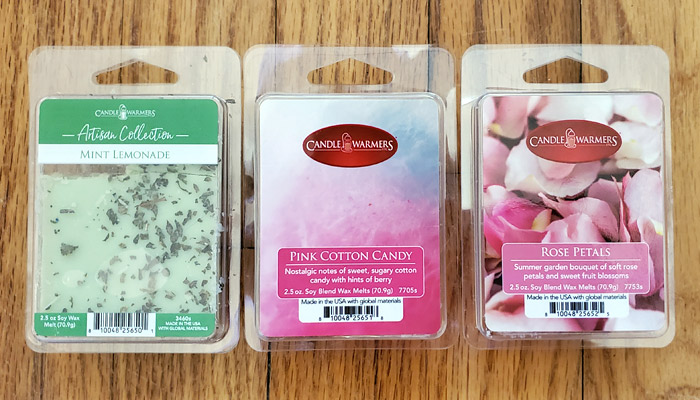 Mint Lemonade
Refreshing, sweet lemonade, blended with crushed mint
This smells like watermelon limeade (not lemon) with green tea, and possibly a smidgen of apple. I'm not getting mint at all. It should be called Watermelon Lime Tea! It's a fantastic, refreshing scent.
Pink Cotton Candy
Sweet, sugary cotton candy with hints of berry
This smells very similar to the old Tuscany Candle Cotton Candy scent. I no longer have it to compare, but I distinctly remember that scent. It kind of smells like fruity bubble gum, with that artificial berry note, but not in a bad way. It also has a tiny bit of tanginess, which could be lemon (although I don't detect lemon), but I think it's actually raspberry (but a very fake raspberry, although not in a bad way).

Comparing it to the new Threshold Pink Cotton Candy from Target, they're totally different scents, even though they both smell like cotton candy (although the Target version doesn't smell nearly as much like cotton candy now that I've smelled this version!) Sniffing them side by side, the Threshold scent is strawberry with a slightly tangy pineapple note, and although it's sweet, it's not "spun sugar" sweet. This scent, however, smells more like fruity bubblegum, I think the fruit is more raspberry than strawberry, there's no pineapple, and it has that "spun sugar" sweetness. Of the two Pink Cotton Candy scents (both of which are fantastic), this one smells more like authentic cotton candy.

Rose Petals
The fragrance of a summer garden bouquet with soft rose petals and sweet fruit blossoms
A lovely scent of rose with a tea rose note. It's slightly perfumey and smells more like rose scented soap than authentic rose, which is perfectly okay because it smells great. It doesn't have the bitter note that some rose scents tend to have.
MORE Candle Warmers Wax Melt Reviews
Do you own or work for a wax melt company? Our FREE Review & Promotion Service can help you get more customers!
Join Facebook Group