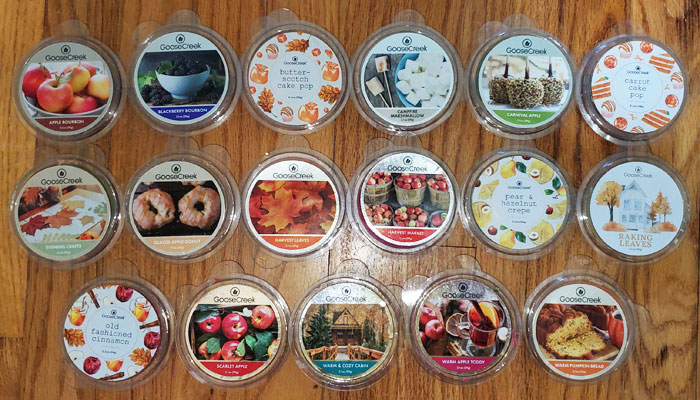 This is a review of Goose Creek Candle Fall 2022 wax melts, which can be found at goosecreekcandle.com. Fantastic and strong, and with 8 apple scents!

Some scents are new, and some have returned from previous years. The wax formula seems to have changed and the wax is harder than before. With the round packaging, this makes it a bit difficult to break off a cube evenly. It's not a big deal though, and the scents are fantastic and strong.

Warm & Cozy Cabin
Top: Italian Bergamot, Pine Needles; Mid: Lavender, Fir Balsam, Warm Amber; Base: Cashmere Woods, Cedar Firewood, Spiced Patchouli
A woodsy scent of pine, smoke, and maybe a hint of oud (a deep, resinous woodsy note). It's not a sweet scent, but very rich, and it does have just a smidgen of sweetness and softness. I like it! Looking at the notes, I'm not getting bergamot (a citrusy note that adds a clean cologne note to scents) as there are no cologne notes in this scent. Lavender is the note that's adding the softness and a hint of sweetness, although I don't think I actually smell lavender. I think I do detect a smidgen of patchouli, but it's not a patchouli scent, per se.
Warm Apple Toddy
Crisp Apple, Warm Cider, Pear & Toddy
A very nice sweet scent of apple and pear with some apple cider spices, but it's not as "harsh" as most cider scents. It's quite sweet, with a bit of caramel and brown sugar. I like it! Looking at the notes, they're spot on.
Warm Pumpkin Bread
Baked Bread, Pumpkin Puree, Cinnamon & Clove
Very nice super sweet pumpkin scent with maybe a bit of brown sugar. I'm not getting the bread note though. It smells like sweet pumpkin pie but without the pie crust. Unfortunately, the scent was pretty much gone in under 2 hours.
MORE Goose Creek Candle Wax Melt Reviews
Do you own or work for a wax melt company? Our FREE Review & Promotion Service can help you get more customers!
Join Facebook Group