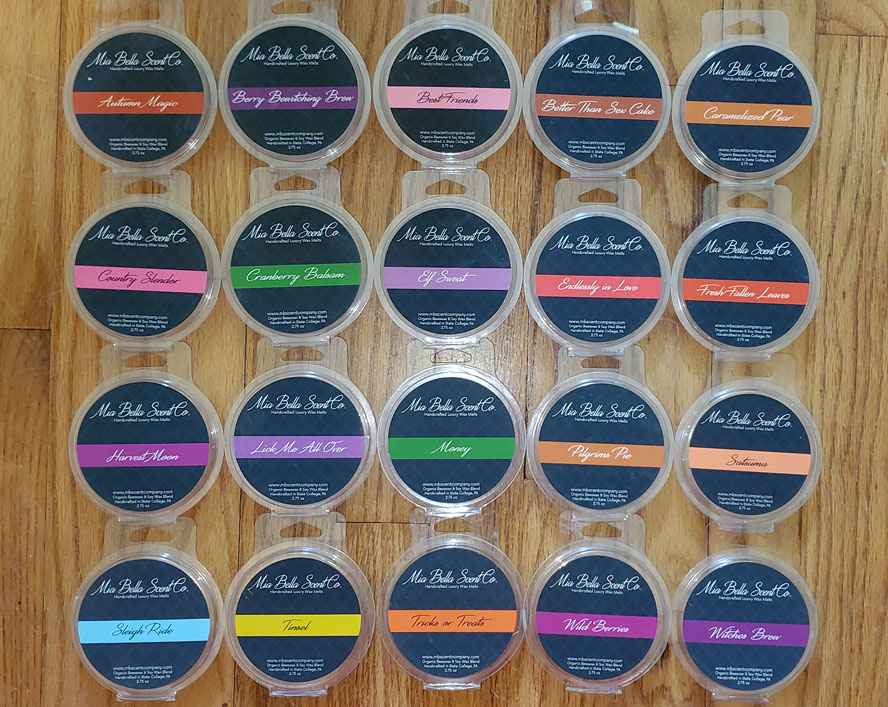 Mia Bella Scent Company is a crafter of organic and dye-free scented wax melts. They use their own proprietary blend of beeswax and soy waxes, handcrafted and hand poured in State College, Pennsylvania, using the highest quality standards possible. Mia Bella's product offerings are always growing. Visit them today at www.mbscentcompany.com and use promo code WMREVIEWS to save 20% off your order.

We enjoyed reviewing these wax melts. In general, great scents and very good throw. Although the wax is beeswax and soy, it's not soft or crumbly; the surface of the wax is a bit greasy, but the wax itself is quite hard and not messy, and it's easy to break off a cube. We found that the lids may leave gaps when closed (which can cause the scent to dissipate within weeks or months), so be sure that when you close the clamshell, it's snapped shut all the way around.

This is a different company from Mia Bella's Mia Melts made by Scent-Sations, Inc.

Wild Berries
sour cherries, fresh blueberries, and ripened raspberries
A really nice, fruity scent of sweet strawberries, a hint of blueberries, and maybe a smidgen of raspberries. Looking at the notes, I don't detect cherry, although on cold sniff there's a bit of sour note that I don't smell at all when melted.
Witches Brew
This smells like fruitcake! I smell fruit like plums and brandied cherries, along with raisins and ginger that gives it a gingerbread note, and a hint of cloves. It's a fantastic, rich, yummy scent. No scent notes provided, but from sources I've found online, Witches Brew scented oils include cinnamon, clove, berries, apples, cedarwood, amber, and patchouli.
Do you own or work for a wax melt company? Our FREE Review & Promotion Service can help you get more customers!
Join Facebook Group