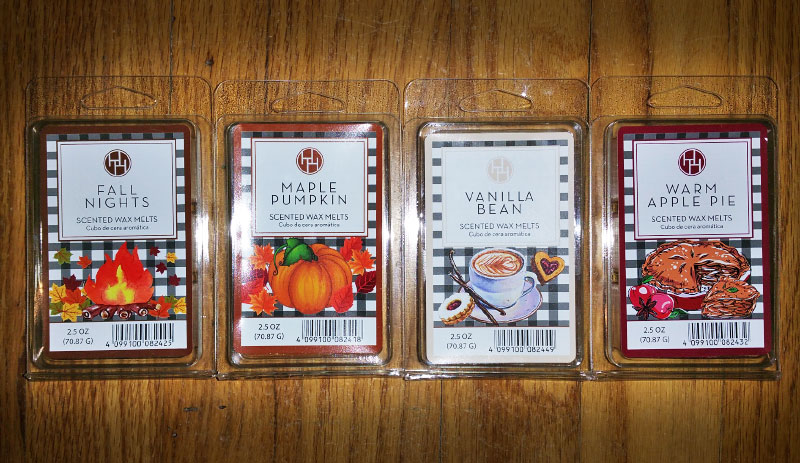 This is a review of the new Aldi Fall 2019 Wax Melts (Huntington Home brand): Fall Nights, Maple Pumpkin, Vanilla Bean, and Warm Apple Pie. The clamshell plastic is a bit flimsier than before, and when you close it you have to make sure every corner snaps shut.

Some Aldi stores got these new Fall 2019 wax melt scents in last week, some are getting them this week, and a couple might not get them at all. If any of these scents interest you, make sure you buy them as soon as possible, as they sell out within 2 or 3 weeks. Some scents may return next Fall, and some might not. They cannot be ordered online, although since they are made by Hanna's Candle, some of the scents may be available under a different name on the Candlemart (Hanna's Candle) website (not confirmed by Hanna's Candle).

Fall Nights
Crunchy fall leaves
I believe this is the same scent as Aldi Falling Leaves from September 2015. It smells like really old apples (but in a good way) mixed with woodsy leaves and an apple cider note. It's a typical old woodsy fall apple scent, but it's a great scent. It's not the same as Aldi Fall Nights from 2018, which was the same scent as Hanna's Candle Ember Glow, a raw woodsy scent with a deep oud wood note and possibly a smidgen of leather.
Maple Pumpkin
Pumpkin spice blended with buttery caramel, honeyed cream and vanilla
A nice caramely vanilla type scent with a little bit of brown sugar and a slightly raisiny note. There may be a hint of pumpkin spice, but if so it's very subtle, and there's no pie crust notes. It's the same as Pumpkin Caramel Parfait (not confirmed by Hanna's). I don't think it's the same as the Aldi Maple Pumpkin from 2018, and it's definitely not the same as the Aldi Maple Pumpkin from 2016.
Vanilla Bean
Creamy vanilla
Vanilla cupcake with a yellow cake note and a little bit of buttercream frosting. I'm not sure if it's the same as the Aldi Vanilla Frosted Cupcake from 2017.
Warm Apple Pie
Fruity notes highlight this crisp apple scent
This is a different scent from the Warm Apple Pie scent from previous years (which was the same as the Hanna's Candle Warm Apple Pie scent). It's a crisp, fresh apple scent, and although it's not totally authentic, I like it much more than the older scent which was a generic, slightly waxy apple pie scent. This one is fresh and pleasant! It's the same scent as Hanna's Candle Jolly Rancher Green Apple (not confirmed by Hanna's).
MORE Aldi Wax Melt Reviews
Do you own or work for a wax melt company? Our FREE Review & Promotion Service can help you get more customers!
Join Facebook Group