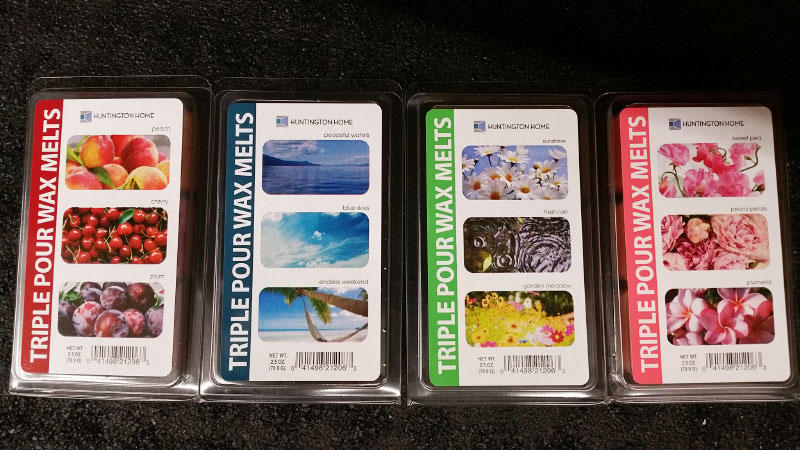 Read Aldi Wax Melt Reviews from Summer 2016 (Huntington Home brand). The summer wax melts at Aldi are always triple scents. I enjoyed these scents, although as is usually the case with Aldi wax melts, they tend to sometimes be a bit generic.


The Green One
Sunshine
This one is slightly lemony on cold sniff, but there's some other note in the background that I can't figure out, maybe something green or floral? Melted, it smells different from cold sniff. It's a very nice orangey scent (but not straight orange) with something waxy in the background, but not in a bad way. There may also be a smidgen of lemon and floral in the background, but it's not an "orange blossom" scent.
Fresh Rain
I can't figure this one out. It's a little green and savory, maybe with a touch of floral, but it also smells like some kind of industrial cleaner. It doesn't smell like "rain" at all. I don't know if I like it or not. Melted, I still can't figure it out. It's kind of a non-descript green floral scent with a chemical note. I'm not crazy about this one.
Garden Meadow
This is the one I wanted to try the most, because on cold sniff it smells like fresh grass! It's a very green, herbal, slightly savory scent. But it's not lemony or minty. It actually smells a bit like parsley. I really like this one
The Blue One
Peaceful Waters
This is Mainstays Peaceful Waters scent (which is also made by Hanna's Candle), a fantastic sweet salty water scent that smells very slightly like ScentSationals Bali Shores but it's saltier, and I think there's a hint of vanilla or even caramel. Melted, it might also have a hint of coconut.
Blue Skies
This is a fresh air type scent with a watery note and maybe a slightly floral note, and there's something else in the background that's unusual and a little peppery. It's a nice generic fresh scent. It smells much better and less generic when melted. It's a pleasant clean fresh watery scent with a slight laundry note and smidgen of floral. I don't detect that odd peppery note when melted. I like this one.
Endless Weekend
This is a beachy scent that smells like Coppertone suntan oil mixed with a touch of salty water. I really like this one.
The Pink One
This is the same as the Mainstays triple melt from Walmart that had the same 3 scents in it. All of the Mainstays triple melts were discontinued a year or two ago. There's a difference with one of the scents though.
Sweet Pea
The new sweet pea scent is different from the old Mainstays scent. The Mainstays sweet pea scent was like a floral combined with a rich strawberry vanilla, and it almost smelled a little like Mainstays Peaceful Waters. This new version is more like a fresh floral mixed with apple. I thought it might have been the same scent as Better Homes & Gardens Apple Blossom Freesia (a light apple scent with a hint of floral), but it's not. Melted, it's a generic floral with a bit of a harsh chemical undertone. I'm not crazy about it.
Peony Petals
I think this is the same as the Mainstays version. It's a floral with a slight baby powder note and maybe a smidgen of vanilla. It has a very slight candy quality, but not like a Pink Sugar type scent. Actually, this one smells more like sweet pea than the actual Sweet Pea scent.
Plumeria
This is very light on cold sniff for both the new version and the Mainstays version. It's just a vague generic floral and I don't detect any unique notes. It's not the same as Better Homes & Gardens Tropical Plumeria Petals.
The Red One
Peach
This is a nice authentic peach scent. It's very similar to Mainstays Peach & Mango, but Peach & Mango is a bit sweeter with a slightly creamy component. On cold sniff, this peach scent smells like the outside of a fuzzy peach rather than the juicy insides. But melted, the sweetness comes out and it smells like juicy peach nectar.
Cherry
This is a really nice sweet cherry vanilla scent. It's not a pungent cherry soda or harsh black cherry scent like Mainstays Black Cherry. This one is more like cherry Kool-Aid, but there's not a lot of tartness. I thought it might be similar to Yankee American Home Merry Cherry, but it's not. Merry Cherry is more like a fake cherry candy with a perfumey quality, a really nice scent, but nothing like this Cherry scent, which is more "cherryish" than that. This is a perfect cherry scent.
Plum
This is a sweet plum scent that actually smells more like cherry. Melted, it smells like a cross between peach and cherry. It's a nice generic berry scent, but the scent only lasted about 2 hours.
MORE Aldi Wax Melt Reviews ►
Comments
Join our Facebook Group for MORE discussions about U.S. store bought and retail brand wax melts.