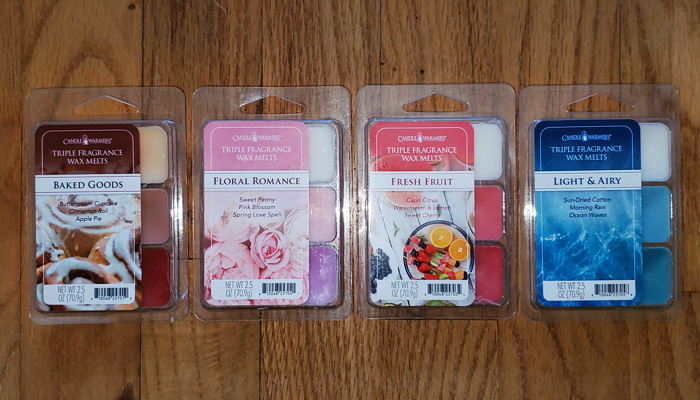 These 2.5 oz. wax melts are $3.49 each, which is too expensive considering the fake generic nature of the scents, the chemical notes, and the fact that most of the scents dissipated within 2 to 3 hours. With a few exceptions, they more closely resemble dollar store wax melts, and are certainly not as good as Candle Warmers' regular branded wax melts. Maybe they had to skimp on quality or outsource the manufacturing to be profitable through Walmart?

Baked Goods
Buttercream Cupcake
This is not a buttercream or vanilla or cupcake scent, and it has no cake or bakery notes. It smells like margarine... very rich, a little salty, and with only a smidgen of sweetness. It should smell good, and it "kind of" does, but it's more like cheap, generic tub margarine with a waxy chemical note. On its own it's just too much, but I suppose it could be mixed into other scents to give them a rich, buttery note.
Cinnamon Roll
A fake, cinnamon-ish bakery type scent, but not a cinnamon roll, as it's not quite sweet enough. It has a tiny bit of a soapy note.
Apple Pie
A generic apple pie scent with a bit of cinnamon and not as much apple as other apple pie scents I've smelled. More like the pie crust with cinnamon and a little bit of apple. It's sweet and rich, and quite nice.
Floral Romance
Sweet Peony
A delicate floral (not sure what kind, but not peony, which tends to smell like rose), baby powder, vanilla, maybe a hint of amber or sandalwood, and a smidgen of cherry tobacco. It's a great scent!
Pink Blossom
Fake cherry with a hint of unidentifiable floral (sweet pea?) and maybe a smidgen of orange. It has a chemical note and is right on the edge of smelling like cheap bathroom deodorizer (but not quite there), but I really like it.
Spring Love Spell
A sweet scent that I think is supposed to be a floral with a hint of fruit, but it just smells like a fruity floral scented chemical. Not horrible, but not great. Despite the name, this is not a Victoria's Secret Love Spell dupe, so it's not the same as Candle Warmers' Pink Love Spell.
Fresh Fruit
Capri Citrus
Orange is a scent that's difficult to mess up in a wax melt or candle. Even the cheapest, most generic orange scented wax melt might still smell pretty good. But I have no idea what this is supposed to be. I assume orange due to the "citrus" in the name, but there are no citrusy (orange, grapefruit, lemon) notes in this scent. I'm getting more of a fake grape with a chemical note, or it could be cranberry or black cherry? I'm just not sure what this unidentifiable fruit is supposed to be. It's not awful, but it smells like a fruit scented chemical. I'm not a fan.
Watermelon & Lemon
This is the same as Candle Warmers' Watermelon Lemonade and IllumiScents Juicy Watermelon Lemonade. It's a very nice combination of zesty lemon, watermelon, and green tea, although it smells a bit more like watermelon lemon verbena or watermelon lemongrass. It's sweet but not overly sweet. I really like this one!

Since there are only 2 cubes in this $3.49 clamshells, if you like this scent it would be more economical to buy the single scent, 6-cube, 2.5 oz Watermelon Lemonade scent from CandleWarmers, or the IllumiScents Juicy Watermelon Lemonade (which can still be found at Walmart as of May 2022).

Sweet Cherry
This is a strawberry scent rather than cherry (I think?), and not as sweet or fruity as I'd hoped. It has a bit of a chemical note, but not enough to ruin the scent, like strawberry scented room spray, but not as sweet. It's actually a fairly nice scent, although not even close to authentic.
Light & Airy
Sun-Dried Cotton
A nice sweet laundry type scent, but not a typical detergent or fabric softener scent. It has a chemical note, and I've smelled similar scents in cheap, dollar store wax melts. That doesn't mean it's not a good scent though, because it is (very good, actually), although it does smell very fake. I don't think it's the same as Candle Warmers' Sunkissed Cotton or IllumiScents Sundried Linen (both of which might include a gardenia or musk note), and I don't know if it's the same as Candle Warmers' Sun-Dried Linen.
Morning Rain
A pleasant fresh, watery scent with a floral note and possibly a smidgen of fruit. Like the other scents in these wax melts, it's a bit generic, but doesn't have as much of a chemical notes as the others, so it's quite nice.
Ocean Waves
A fresh, oceany water type scent, just kind of "meh". It's not all that sweet and has a tiny bit of a waxy note. I've smelled this scent before for oceany water type scents from other brands.
MORE Candle Warmers Wax Melt Reviews
Do you own or work for a wax melt company? Our FREE Review & Promotion Service can help you get more customers!
Join Facebook Group