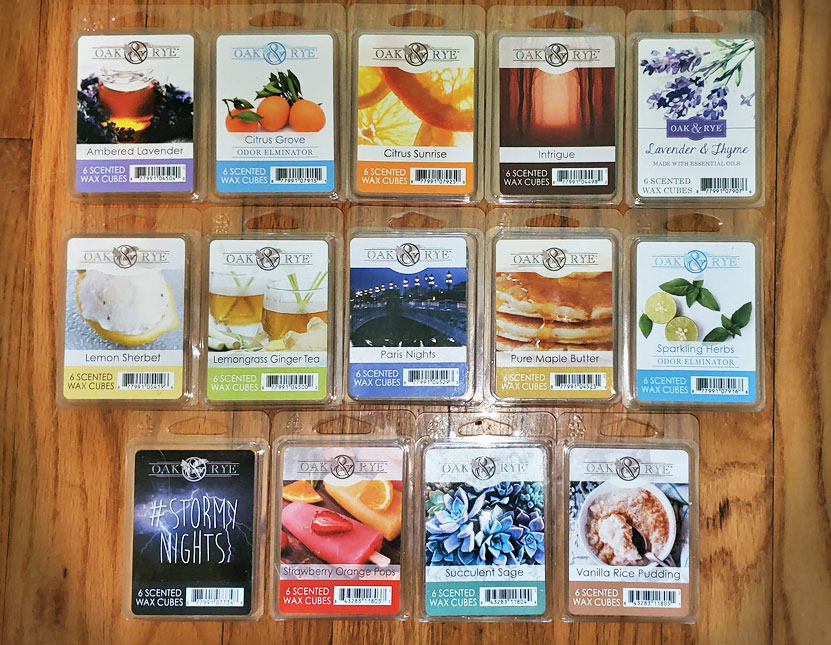 This is a review of Oak & Rye Wax Melts Reviews from Kroger and Fred Meyer stores. Oak & Rye wax melts are made by Rimports (the company that makes ScentSationals) and this brand is made exclusively for Kroger.

Ambered Lavender
Notes: Shimmering, herbal aroma of rich lavender blossoms balanced by tender accents of sweet muguet and a touch of vanilla-scented heliotrope
A wonderful, even combination of sweet lavender and rich warm amber. It's a sweet lavender rather than a medicinal lavender. It's different from Better Homes & Gardens Sugared Lavender Twist, which is another sweet, rich scent with lavender, but Sugared Lavender Twist is pink sugar (a marshmallowy perfume scent with hints of raspberry and blackberry) plus amber and lavender.
Citrus Grove Odor Eliminator
Notes: Pine, citrus and spice
I believe this is the same as an old ScentSationals scent (from before 2014) called Citrus Garland, a fantastic, savory, slightly sour blend of grapefruit and pine.
Citrus Sunrise
I didn't really like this on cold sniff because it smelled a bit waxy and artificial, but it smells great when melted! It's primarily orange, but I'm also detecting a bit of a tropical note. It's quite sweet, and not as "citrusy" as other orange scents, but it's not an orange "candy" type scent either. It's definitely different from other orange scents I've smelled. I reviewed a ScentSationals Citrus Sunrise scent from Meijer, but I think that was a different scent than this one because it had a grapefruit note, which this scent does not. AmbiEscents also has a Citrus Sunrise but I think that may be different from this one as well. Or they might all be the same scent, as scent can vary slightly depending on the batch, age of the wax, and the reviewer's nose!
Intrigue
A super sweet warm ambery scent with a candy note, a hint of an incensey note, a smidgen of a perfumey note, and possibly a barely detectable smidgen of vanilla. It's similar to ScentSationals Mayan Amber & Vanilla, but sweeter, softer, more candy-like, and without the woodsy or cedary notes. It's the same as the old AmbiEscents Intrigue.
Lavender & Thyme
Notes: Fresh lavender balanced with crisp elements of aromatic thyme, balsamic fir needle, and dew-covered herbs.
An authentic lavender scent, like the lavender plant itself. It's not sweet at all (or maybe just a smidgen of sweetness), and it's a little medicinal but not too much so, more like an herbal, kind of savory, slightly zesty lavender. When melted it's a very nice fresh almost soapy lavender scent that doesn't need any sweetness. It's very similar to ScentSationals Fusion Sweet Lavender & Rosemary, but I don't think it's the same scent; that scent has a eucalyptus note that this scent does not, giving it a little more of a medicinal note. It's the same scent as ScentSationals Fusion Dream Big (Lavender & Thyme).
Lemon Sherbet
Notes: A blend of lemon, lime and sage
This is definitely not a lemon foodie scent, and it has barely any sweetness. It's a soapy lemongrass spa type scent with a hint of a sparkling lemon note (but not a fizzy lemon like lemon soda). It smells like a lot of other similar lemongrass spa type scents.

It's the same scent as AmbiEscents Italian Limoncello and ScentSationals Fusion Limoncello Popsicle.

It smells almost exactly the same as ScentSationals Fusion Limon, but that scent has a little less of the soapy lemongrass spa type note and more of the lemon, and with a slight saltiness (however, apparently it IS the same scent, because the notes for Limon are "fresh, juicy, citrus lemon bursting with zesty lime and herbal sage")!

It's also very similar to Oak & Rye Sparkling Herbs, but with the added hint of sparkling lemon.

I like this scent, but it's even better mixed with peppermint or lavender!

Lemongrass Ginger Tea
Notes: Sun lit bergamot swirls with fresh cut lemongrass and soothing white tea amid the warmth of gleaming ginger
This smells like soapy lemongrass with a little bit of a tea note. It smells more like a spa scent than a beverage scent. It's nice, but bland, and not sweet enough. It's the same scent as ScentSationals Fusion Tea-riffic!.
Paris Nights
Notes: Aquatic sea kelp and brilliant marine mosses that reveal black peppered basil and earthy sage embraced by white cedar, cardamom, grated nutmeg, and salted musk with amber.
This is the same as ScentSationals Dapper (men's cologne scent with a little bit of a smoky cedar note), although it's a different color (usually dupes use the same color wax). But the scent notes are the same. It's a great scent! It's also the same scent as ScentSationals Fusion Starry Night.
Pure Maple Butter
Notes: Sticky drops of Vermont maple and deep, powdery honey blended with buttery vanilla
This smells just like warm pancakes with tons of rich, slightly salty butter and just a hint of maple syrup. It's so yummy I want to eat the wax! I can actually smell the bready note of the pancakes. It's similar to ScentSationals Waffle Love but not the same scent (that scent does not have the bready pancake note, and it's much more maple-y). It's the same scent as ScentSationals Fusion Warm Maple Butter.
Sparkling Herbs Odor Eliminator
Notes: An aromatic, herbaceous blend of fresh-picked lemongrass swirled with cool eucalyptus highlights, frosted wild mint, and a touch of sweet garden thyme.
A soapy lemongrass scent without any sweetness. It's like a cross between bland Ivory soap and lemongrass. It's a nice spa scent, but too bland on its own. Mixing it with lavender gives it a relaxing vibe, and mixing with peppermint gives it a much needed oomph! It's the same scent as ScentSationals Fusion Herb Garden Odor Eliminator.
Stormy Nights (#StormyNights)
This smells like coconut with a sweet candy and vanilla note and a hint of a fresh, watery men's body wash. It has a tiny bit of harshness or something, but not enough to be annoying. I love this scent! It's the same as the old Estate scent from J.C. Penney called Black Coconut Sands (the Estate brand by ScentSationals was discontinued last year). It also smells a lot like Better Homes & Gardens Blue Harbor Cove (but with much more coconut). And I thought it may have been the same as ScentSationals Boardwalk, but it's totally different (Boardwalk is soapy and sweet with hardly any coconut, although Boardwalk would be kind of similar if it weren't soapy, or perfumey, and had a lot more coconut in it).
Strawberry Orange Pops
Notes: Zesty citrus orange spun with sweet hints of fresh meadow strawberry swirled with creamy undertones of smooth vanilla bean
This is the same as ScentSationals Strawberry Orange, which smells like super sweet strawberry and orange hard candy. It's incredible!
Succulent Sage
A salty, slightly savory, sweet, slightly soapy, clean lemony scent with a men's body wash note. It smells VERY similar to ScentSationals Agave Lime, but that scent is slightly sweeter and "harsher". It's also very similar to Better Homes & Gardens Clear Blue Oasis, but not exactly the same. It's also kind of similar to ScentSationals Cactus Garden (a salty, savory, zesty scent with a smidgen of a cologne note, and a hint of tart lemon), but this scent is much brighter and sweeter, with a stronger fresh men's body wash note. It's fantastic, and when melted I can definitely smell the lemon which makes this scent smell really fresh.
Vanilla Rice Pudding
What an incredible scent! It really does smell like rice pudding, a sweet milky vanilla with a generous sprinkling of cinnamon on top! I'm sure I've smelled this scent before, but I don't know what ScentSationals scent it's a dupe of (if any). I'm not a fan of a lot of foodie scents, but this one is scrumptious!
MORE Oak & Rye Wax Melt Reviews ►
Comments
Join our Facebook Group for MORE discussions about U.S. store bought and retail brand wax melts.